This week’s amazing animal of the week is the Gila Monster. Gila Monsters are black and orange lizards which grow up to almost 2 feet in length and are one of the heaviest reptiles found in the Grand Canyon, weighing in at over 5 pounds. Their skin is covered in round, bead like scales and they can live for up to 30 years. 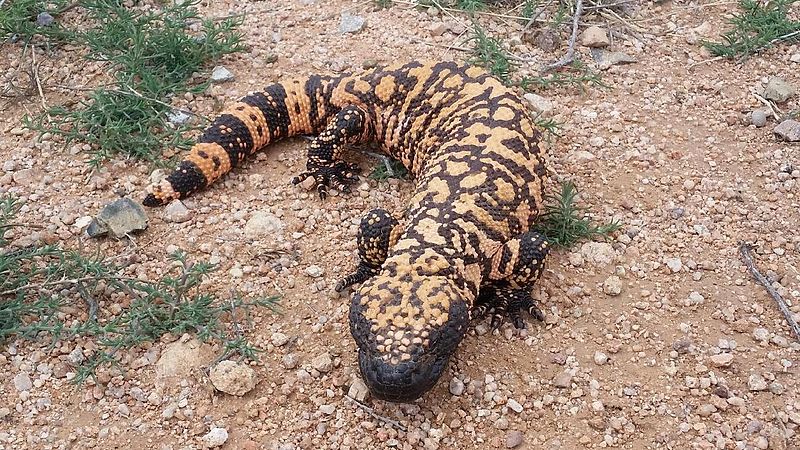 There are over 5000 lizards in the world with up to 100 species producing venom including the monitor lizards, Mexican Bearded Lizards, iguanas, and Gila Monsters.

Unlike snakes, Gila Monsters do not inject their venom into their prey but rather the venom just flows into the bite. Humans are rarely bitten because Gila Monsters tend to be quite shy, but, if bitten, venom can cause paralysis, difficulty breathing and sometimes convulsions. No known human deaths have occurred because of a Gila Monster bite but their bites can be painful. Watch this video for more info on Gila Monster bites.

Gila Monsters are carnivores and hunt for rodents, other lizards, bird eggs, and invertebrates. They are slow and stealthy when they hunt. Their venom is mostly used for defense rather than hunting. They detect smells with a forked tongue.

Gila Monsters only live in the desert. They burrow during the hot part of the day. In the winter, they live in the burrows of desert tortoises and live off the fat they have stored in their tails.

Gila Monsters are endangered in the United States and Mexico. It is illegal to harass them, trap or capture them, hunt, shoot, wound, or kill them, or collect them.

Image: This file is licensed under the Creative Commons Attribution 4.0 International license.